Victorian Drains was an area accessible by going down the stairs located in the centre of the Aquarium in the Overgrown City and could be divided into three main parts. It was removed from the game in version 0.113.

After you walk down the stairs in the centre of the Aquarium, you'll arrive in a maze, standing in water. This area features tight passages, but it's actually hard to get lost in here because it's almost a direct path to the second part of this map. Here you can find lots of small plants growing in the water and large plants that look like trees caught in a web. Also, in the south west side of maze, not far from the entrance, you'll find a sitting fisherman resembling the one in the Deserted Pier. He doesn't react to any effects, he just continues fishing and trembles when interacted with. After you scale some ladders and go through some passages, you'll come to the second part.

Unlike the previous area, this one is very colorful, bright and has a pretty melody playing. Here are many torches and glowing mushrooms, walls covered in graffiti-style eyes, and there are glowing orbs flying around. You can also find two benches here. Going further you'll pass a ring on the floor and a creepy location which looks like bleeding eyes, painted with black on a red background. Heading right, you will arrive at the last part of this map.

The last part of this location resembles a park, abandoned long ago. It features a horse on a spring, a working vending machine, a creepy looking tunnel, the skeleton of a dinosaur, and a boat in the upper side. After you interact with the horse on a spring, Urotsuki will sit on it, and you can swing her back and forth by pressing right and left. In the upper side of that part you'll see a boat. After Urotsuki gets to the pier, the screen will pan and you'll be able to see a shiny background that resembles a town. You'll also notice a strange yellow arch with hands that will teleport you to the Bioluminescent Cavern.

Map of the Victorian Drains and Overgrown City 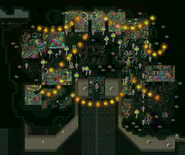 Carnival Town in its entirety

Didn't expect that under the Overgrown City?

A bit of joy

Community content is available under CC-BY-SA unless otherwise noted.