Transmission Tower World was a fairly small area that could be reached from the little house in the forest section of Chaotic Buildings. It was removed from the game in version 0.113.

A tint of green is used here, along with heavy fog. Lots of huge and very old transmission towers fill the area. Going east will bring you to a manhole with a ladder that leads to a passage with blue lanters hanging from the ceiling. Going through it takes you to a cute room with a little green thing sitting and bouncing in place. You can rest under the kotatsu in the middle by interacting with it from the lower side.

By not going down the manhole and instead going south-east you'll see a huge building made of cables. It takes you to the Complex. 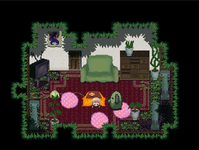 at last, a bit of color

A lone creature resembling a deformed musical note wanders aimlessly.
Add a photo to this gallery
Retrieved from "https://yume2kki.fandom.com/wiki/Transmission_Tower_World?oldid=55280"
Community content is available under CC-BY-SA unless otherwise noted.