The Docks is an area accessible from the Apartments in the Library.

The Docks are a misty area consisting of wooden piers arranged in a maze over a large ocean. Random objects can be found in the water such as metal hands or sinking tanks.

Around the West side of the map you can find a ferryman who will take you to the Realistic Beach. Slightly northwest of the ferryman, you can find a pipe leading to the River Road. A little northeast of the pipe is a teleport to the Apartments in the center of a spiral, and slightly east of that is another teleporter to Teddy Bear Land.

Near the end of the maze you can find red scarecrow-like girls sticking out of the water around a submarine.

The submarine is located at the end of the maze along with the Commando & Provost-san who sometimes sit outside on the docks when the submarine is closed.

If the submarine is closed, you can get it to open if you ride over the Event marks on the path near to the submarine several times.

The submarine's inside is a small round area with two windows and a control panel. Interacting with Provost-San (or Kenpai-San), will turn the walls transparent. You can sit on the empty stool in front of the control panel. If you interact with it, Kenpai-San will look at you (almost as a warning).

Once you sit on the bench for a while then the scrolling sea background will slow down and the radar noise will change, after this you can get out of the submarine, and it will take you to the Ocean Floor.

Old map of the Docks 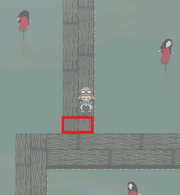 The tiles to open the submarine.
Add a photo to this gallery
Retrieved from "https://yume2kki.fandom.com/wiki/The_Docks?oldid=52642"
Community content is available under CC-BY-SA unless otherwise noted.