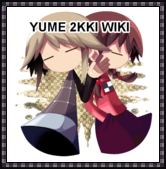 One of the most perplexing thing about Yume 2kki is the lack of updates after a new version is released (information on just what was added or subtracted from the game). Is there any kind of update page anywhere? If not, it would be a nice addition to this wiki.

I wonder if we can get in contact with the original creator of this wiki so that we can change the overall theme a little.

His last edit was in late 2011 but if all else fails we could probably get Wikia to do something.
Fatlenin1 (talk)

You should go ahead and apply for wiki adoption as the resident sysop has apparently been missing for over a year. The wiki's averaging several edits a day too now, which is surprisingly active considering how obscure its subject matter is. Fatlenin1 (talk) 07:48, February 1, 2013 (UTC)

Are there any more articles that would be useful to be directly linked to on the home page, or is the random Featured Article enough?

Do you mean articles for the image-buttons? The Music Room Track Listing page would be a good choice if we just renamed it to "Music Room" or "Soundtrack". I've just put it in the featured articles for the moment, but it's a pretty important page although it needs some work and a section for the new unnumbered tracks

Yes I did. I had the Music Room track listing in mind initially and have already produced a button for it, so I'm wondering if there are other articles people want quick access to.

I can't really think of anything else super-important that the front page is missing other than that, hopefully someone else will mention something that'll be useful :)

The Computer page could be helpful but I don't really think it's important enough for a clicky-button myself. LainIwakura (talk) 13:46, December 10, 2014 (UTC)

Can we add Return/Enter to the list of "Interact" keys? Edit

I have a draft of an edit to the "About Yume 2kki" section of the main page. As I am nervous about major edits, I'll wait for other to approve the draft, revise it, make comments or suggestions, or make the edit themselves. I don't want to edit the main page just for the sake of it, but I'd like the introduction to the wiki to read smoothly, and be linked properly (but not overly verbose, long, or over-linked).

Yume 2kki (ゆめ2っき) is the fanmade "sequel" to the popular RPG maker game Yume Nikki. In it, you play as a young girl named Urotsuki exploring her dreams, much like Madotsuki in Yume Nikki. The goal of the game, like that of its predecessor, is to collect the Effects scattered throughout the many dream worlds. However, Yume 2kki is far larger than its prequel and still growing, as it is under development (although it's still fully functional); the purpose of this Wiki is to provide you with assistance should you get lost or be unable to find a certain effect, or to entertain those that are curious about the many different characters and locations of Yume 2kki.

Retrieved from "https://yume2kki.fandom.com/wiki/Talk:Yume_2kki_Wiki?oldid=38529"
Community content is available under CC-BY-SA unless otherwise noted.