Red Black World was a world that was formerly accessible from The Nexus, but has since been completely removed in newer versions of Yume 2kki. This world was the original location of the Fairy effect.

This area is filled with red and black tribal patterns, with the occasional tile being random things. Stepping on these patterned tiles will play different noises. An elliptically-shaped red NPC can be seen running down the map very fast.

When entering the world, you'll notice a path to the west, leading to a tunnel. Going through the right end will take you to an area with several discontinued NPCs, such as the flower from Pokémon World, a strange blue red and yellow object, and the Fairy effect. The left end will take you to a dead end area of the Highway, near the entrance to the Purple Neon Maze.

Walking southwest, you'll find a small enclosed area full of bloody eyeballs. To the southeast, you'll eventually find a small maze, containing four Shadow Chasers. Further southwest of the maze you'll find an area where the ground is tiled with 死 (shi, death), and stepping on these tiles will make the sound as though the Maiko effect is equipped. Should you walk onto the middle of the tiles, you'll be trapped in a looping area full of 死, and ultimately have to wake up to escape.

This world, after it got replaced by the Character World, has been minimized to a maze, where you could access the Highway and the Pokémon World. The Red Black Maze is a very small area compared to the actual world there used to be in versions prior to the Character World. 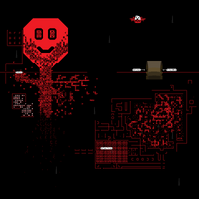 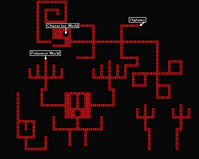 Map of the Red Black Maze.

THESE SYMBOLS ARE EVERYWHERE MY GOD

Entrance from the Nexus
Community content is available under CC-BY-SA unless otherwise noted.