Mushroom World is one of the main areas accessible from the Nexus.

Mushroom World is an orange mushroom-themed world filled with lots of mushrooms of varying size and color, surrounded by long winding paths that run throughout the area. It is also home to pink, blue and purple Mushroom NPCs with feet, which wander the area.

Different creatures can occasionally be found swimming in the lake, including green one-eyed monsters and grey stone-like things.

On west side of the lake there is a small rest area with a Vending Machine with broken glass, but if you try to buy anything from it, it will laugh and stick its tongue out at you, then steal some of your money. Interacting with the bin next to the machine will make the hole flash red.

Further southwest of the rest area, there is an area enclosed by mushrooms with a narrow path on the south side that leads to a white drooling blob. Interacting with the blob will teleport you to a similar enclosed area with a pair of eyeballs on stalks, which will take you to the White Mushroom Field (裏きのこ, Ura Kinoko, Back Mushrooms) if you walk in between them.

Walking between the eyeballs on stalks in the main area will take you to the White Mushroom Field. Instead of the warm, sunny color scheme of Mushroom World, this area is extremely high contrast, with splashes of dark red breaking up the world's otherwise monochrome appearance. The walking mushrooms in this world are all white, and one of them has a red eye on it. 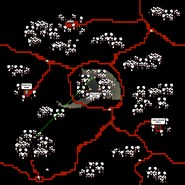