Japan Town is an area accessible through from the Sewers in the Dark Room.

Japan Town is a street through quite a large old Japanese town, full of residential activity, with a friendly old-world charm.

The area consists of a main street lined with old Japanese buildings and shops, and various minor characters going about their daily lives in the streets. Kanban Otoko, Wheel Girl, and News Man can be seen in this area. If you sit next to News Man on the bench and wait a few seconds, a bus will come along and transport you to the Maiden Outlook.

There are a number of areas to access from here, such as The Hotel, found partway through town, and The Back Alley next to it.

Near the entrance of the world is a wall with a dark spot underneath it marked with arches, by using the Boy effect, you can urinate on the wall. Doing this activates many different chaser related events across the dream world, like the clown in Marijuana Goddess World, the paper Shadow Ladies in Chocolate World and more.

Further down you can find the Box Shop, home to the Box Shop Keeper, a blue robot who sometimes looks out of his shop and nods when you interact with him. If you use the Fairy effect near him he will applaud your little show.

Interacting with the red mailbox outside the Box Shop will teleport you onto an exhibit table in the Dark Museum, currently a dead end, with nowhere to go but back through the mailbox.

Through the wooden door next to the shop is a small alley featuring graffiti of a pastel city on the wall. Using the Glasses effect here will reveal a hidden door leading inside the Box Shop next to the pile of garbage.

If the shopkeeper is sitting inside, you can join him using the Boy effect, and he will squint at you happily.

To the left of the box shop, going through the gap in the bushes closest to the pole will take you to an alley behind the hotel. Going through the connecting alley here joins up with the main part of the back alley, and you can access the hotel using the back door at the right end of the alley.

At the very edge of town a black building with a neon sign outside leads down into a dark sub-area of the Sewers. Traveling to the left, you will eventually come to The Underground Bar.

Various places around Japan Town will give you Money if you are running low (below 500夢); Checking the box shop's drawers will give you 100夢, and checking the hole between the hedges nearest to the Underground Bar will net you another 100夢.

A quiet and rather dark building. Through the doorway at the top of the room, there is a narrow pathway with bouquets strewn around the sides. The room at the end of the path simply contains a desk with a lamp on it, however the room shakes a lot. If you equip and use the Glasses effect, you will see a lot of dark shadowy figures clustering around you.

Through the door to the left, there is a complex of darkened stairways, with doors to the hotel lounge located at the top and a doorway that leads to a room, decorated with various masks, running through the middle of the stairwell. The stairs descend down further on the left side, leading to 3 other rooms.

Atop the stairwell is the hotel lounge, where the rooms are located, currently being rented by various shadowy blob people. The individual rooms all have a futon, a chest of drawers, and a bathroom in the southeast corner of the room.

In the third room's bathroom, Urotsuki can change into her swimsuit by interacting with the one on the wall, and take a bath. If you stay in too long, you'll transform into a white blob creature.

Exiting from the bathroom while in this form reveals that the blob creature that was blocking the mirror has left. Interacting with the mirror will let Urotsuki see what she has become, and eventually a shadowy blob figure will enter the room and attack Urotsuki. Afterwards, you will wake up in the bed of the room, still wearing the swimsuit. This can also happen in other rooms in the hotel, though it is much rarer.

At the bottom of the staircase area through the double doors is a broken closet, interacting with it will teleport you to the Closet Pinwheel Path. If you go through the door on the left instead, you'll end up behind the front desk where you can receive money from a shadow-blob customer. If you go through the right door, there is a room with lots of garbage bags and a fridge. If you approach the fridge with a large amount of money on hand, a Clown will jump out and try to steal your money. Going through the door here takes you out behind the hotel.

Next to the hotel, you can access a dark back alley edged by water, leading out behind the town. There is a connecting alley halfway down which will take you to the alley behind the hotel, being watched from the water by three shadowy squids.

On the far right the back alley leads out into a dark looping area decorated with ladders, streetlamps and parts of various buildings. Heishi-Kun can be found here, who gives you the Plaster Cast effect when interacted with. If you chainsaw him, the atmosphere changes and flat Shadow Women will appear and chase you.

The black building at the very edge of town leads down into a dark sub-area of the Sewers. This area can be lit up with the lantern effect and features Marijuana-Goddess lanterns and a stream where lotus flowers slowly float by.

Located at the very left of this area is the Underground Bar. A slowed down version of the Buddha Rave song fades in as you approach the door. Inside the bar, Masutaa the bartender shakes his cocktail mixer and a blue fire npc enjoys a cocktail next to a man who has passed out drunk.

If you sit down on the middle stool and interact with Masutaa, he will serve you drinks for 200夢 each, unlocking wallpaper #103. If you drink too much, the bar will start to warp and distort, and after eventually seeing the images of people that she have killed, Urotsuki will wake up.

The inside of the hotel

The First Floor of the Hotel 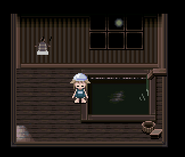