The area is simply a desert with sand dunes and broken hourglasses sticking out of the ground. There are some moving hourglasses similar to those in Chocolate World and strange oddly-shaped striped creatures standing around. There is also an Anubis walking around. The Anubis stands differently when one uses the wolf effect's howl near it.

There is a streetlamp surrounded by jagged poles somewhere in this area. Interacting with it transports you to the Dark Room, enabling access to this area from there.

When entering the pyramid located in this area, you will be transported to an underground maze with various creatures in it. Interacting with a gray hand with blue symbols on it somewhere in the maze will change the arrangement of the maze. Essentially the maze is divided into two looping parts, which you can cross between via this gray hand. A door leading to the Wilderness is on one side and the exit to Sand Desert Land is on the other.

There are two kinds of monsters here which play cheerful beeps when approached. One is rather square shaped and the other resembles a horn. Both are blue, with a single eye.

The room in which you find the Child Effect is in this maze too, but it is one way and you can only get to it by entering the Pyramid Maze from the Ocean Floor.

After entering the Dark Room from here at least once:

To reach the Child effect:

Anubis, as he appears in this world. 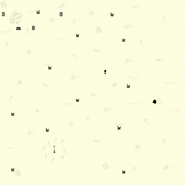 Map of the Hourglass Desert

The room housing the child effect.
Community content is available under CC-BY-SA unless otherwise noted.
Advertisement