The Developer Room is a special room only accessible after seeing the first 4 Endings of the game, reached through the door in Urotsuki's Room while she is awake. It's suggested to have caution while visiting area if the player doesn't have knowledge of Japanese, as some NPC can activate test functionalities that can change some features of the game.

To gain access to the room you must have seen the first 4 endings (in any order):

When you have watched the last of the four endings, Urotsuki will appear at her computer as normal, but a wrapped purple present will fall in the center of the room. Interacting with this present will give Urotsuki the 'Key' effect, which acts passively and allows Urotsuki to exit her room when awake and enter the developer room.

Upon entering the Developer Room through the keyhole door outside Urotsuki's room, you will emerge in the lower hallway of a 4-way crossroads with a sane shadow woman standing in the center who gives information regarding the nature of the room. She first says "Welcome to the Developers' Room," and then tells you which rooms are to the north, west, and east. Last, she reminds you that the exit is to the south, and encourages you to explore.

Going left from the entrance leads to a black and white tiled room with a jukebox by the doorway containing some NPCs representing some of those responsible for the game's soundtrack:

Interacting with the phonograph will start a conversation, and interacting with the keyboard turtle NPC (from the path leading up to the Clown Prison in the Underwater Amusement Park) who can change the music in the room to a variety of tunes from throughout the game, such as Sand Desert Land's Pyramid Maze, Monochrome Feudal Japan and the Tribe Settlement's music, among others. The spinning girl can also change the music, depending on the choices that you provide her. Some of the tracks playable here do not appear anywhere else in the game.

Going right from the entrance leads to a room with an easel by the doorway containing several NPCs which represent some of the artists for the game:

Going straight up from the entrance leads to a large room with an orange box by the doorway containing quite a few of the main area developers, represented by NPCs from their respective worlds in the game:

Interacting with the tall suited man will cause him to spin and fly away after the conversation. The yellow Sky Kingdom NPC will allow Urotsuki to change into one of the Bug combo outfits/effects - these are only usable within the room, only one may be possesed at a time, and interacting with the NPC that gives you them will remove your Bug outfit if you have one equipped. Interacting with the construction sign in the top left corner will lead to a short conversation, after which Urotsuki pulls out her chainsaw and attacks it, making it slightly transparent. Interacting with the sign a second time will cause Urotsuki to hit it several times, killing it and giving her 1000夢 (this can be repeated by leaving the room and entering it again). Interacting with the block in front of the computer will cause it to panic, jump and run away (it will never return), allowing use of the computer. The blonde girl flies around the area at extremely high speeds as you explore the room. By exiting the room and returning, she will then remain stationary, alongside the other NPCs, allowing interaction with her.

There is also a balcony area here, much the same as the one in Urotsuki's normal room. Interacting with the AC on the lower-left corner fades the screen to black, playing a recording of an SSTV broadcast, which when decoded reveals a piece of concept art for the game. If you have attained a 100% map completion rate, the boy from the Glitch Ending will show up, congratulating you when interacted with.

Interacting with the computer will bring up a desktop similar to Urotsuki's normal computer, but you have full mouse movement by using the movement buttons on your keyboard. Selecting the top file with the RPG_RT icon will let you play a slot machine minigame to win 夢. The file with the block person icon contains a short message from Kuraud, and the third contains a message from (unknown) . The fourth shows various gameplay stats, namely the total game time in hours minutes and seconds, number of times slept, and the total number of steps taken so far, and the fifth file with the RPG Maker icon will show a pixelated screenshot of the Gray Road in RPG Maker 2000. (This can also be viewed by clicking on the minimized program in the taskbar.) Finally, the sixth file, right of the first, takes Urotsuki to a map which serves as a program for Conway's Game of Life.

Talking to the purple-haired doll NPC and choosing the fourth, then the second and then the first will take you to an area with many bookshelves like in the Library and talking to the NPC in this area takes you back. The books contain texts about the various effects and you can equip effects in this area and change the texts the books show. Interacting with the orange object near the doll NPC lets you begin a game with chasers that deplete your HP bar. If you lose all your HP, you are transported to Urotsuki's Room. The game seems to be unfinished as you will have no sprite if you return to Urotsuki's Room by choosing to quit the game from the start menu. (this area seems to have been removed as of 0.103a) 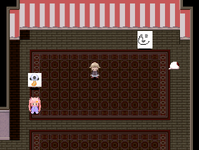