The Binary World is a large area accessible by interacting with the computer in the Warehouse. Depending on what blue screen you see at that computer, Urotsuki either be taken to a blue (blurred screen) or green area (distorted screen). It is recommended to have the Polygon, Marginal, Trombone, and Torch effects before exploring this area.

The area Urotsuki will enter looks like a "sea" of binary code. In both the blue and green areas, there will be a tower that cannot be entered unless Urotsuki uses the Polygon effect, which will transform the binary code into real objects and open the tower.

After climbing up a ladder in the tower you can find a black symbol on the ground and two elevators. The left elevator serves only as an entrance to another room and the right one only as an exit from that room. Inside you can find three connected platforms with a symbol and a creature in a spacesuit on each. If Urotsuki leaves one of those, a force field will block the direct way back to the platform. The NPCs will react to many different effects. Most notably is the Trombone that will reveal the creatures as some kind of fairies and changes the music and background when played on one of the platforms. Doing this on all three platforms will unlock wallpaper #161. By using the Child effect and interacting with the computer tower on the green fairy's platform, Urotsuki will be taken to the Circuit Board. If Urotsuki uses the Spacesuit effect and interacts with a fairy, she will wear a yellow suit similar to those of the fairies with a "2" on the helmet. You cannot use the menu in this state, but Urotsuki can transform back if she interacts with the fairy again.

Using the Marginal effect on the black symbol in the tower will make it more and more red. When it does not change its color anymore and Urotsuki moves on it, she will be transported to an inescapable, dark platform. You can look upwards but you will not see much without the Torch. If she uses it, you can see colorful, broken wires hanging from the ceiling. There is also a purple thing entangled in the wires that could possibly be some kind of creature. Kura Puzzle #46 can be obtained after the viewing the tangled wire lady. 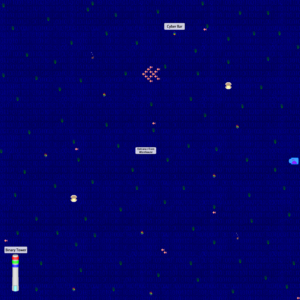 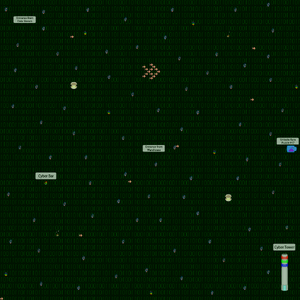